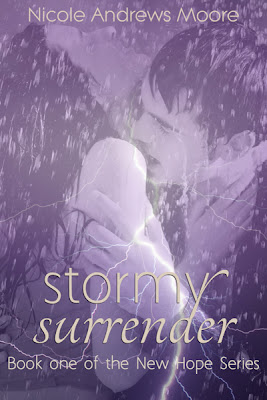 Sometimes the life you planned isn’t the one you get to live. Sometimes the pain of the past overshadows the future. And sometimes to start over you have to go back to where it all began. That’s how it was for Joe Masters. That’s how he ended up back in New Hope. And that’s why he was in his thirties and had nothing to show for his life. He needed a complete overhaul, just like his father’s old house. Instead of a fast track, he had slowed down and was on a ten year plan. These days that was more his speed. And as much as he tried to fight the inevitable, he was learning to accept and surrender.

Martha had weathered her fair share of storms in Vermont, was accustomed to the cold, both the chill in the air and the cold shoulder in her marriage, but after the miscarriage she felt like she would never get warm again. So she did the research from the laptop while sitting in front of the fireplace. She knew what she needed when she Googled ‘hope,’ she just never imagined that it would bring her to New Hope, South Carolina. She never imagined that her husband would trick her into leaving and never follow. She never imagined that a southern storm with all its force and fury could be so destructive. But after the storm, the land is washed clean. It’s perfect for a fresh start, a clean slate, and a new love.

Nicki has lived in Charlotte, North Carolina with her children for the past eleven years and her husband for the past three years.  Her journey has barely begun and she loves every minute of it.  Every day of her life seems to bring new adventures, some bigger, better, shinier and prettier than others.  She's still getting used to that new life smell she's experiencing, a combination of hope, love, and happiness.  (The perfect scents to build a new life on...)

For fun, she spends time with those she cares about, cooks, reads, writes, and especially lives to travel.  The current travel goal: visit every Margaritaville.  Two down!  (Eleven to go?)

In addition to writing on Suddenly Single Journey, Nicki is a contributor for Project Underblog.  Her writing can also be found on Shine, where she is a Shine Parenting Guru and an award winning Yahoo! Contributor on YourWisdom as the relationship and dating expert.  And she has been published by McClatchy News in their syndicated papers.

Marti glanced at the hammer, then the tile, shrugged, and started swinging.  The tile made a lovely high pitched sound as it shattered.  The shards flew about the room, ricocheting off the walls and door before landing on the floor.  And because that first swing felt so good, she just kept swinging.  Each time the sledge hammer connected with the tiles, she would think of what her marriage had been like.  She would recall an incident, or a conversation, or any one of a thousand reasons that she should have dumped him, should have ended the marriage years ago.  It felt good.  Maybe even great.  And then she looked down and saw red.  Literally.  There were blood droplets all over.  Before she could even ponder why the room was looking like a crime scene, the wooden handle was ripped from her hands.

“What are you doing?”  He sounded incredulous.  And annoyed.

“You’re a contractor?  What does it look like I’m doing?”  She was upset that he had interrupted her impromptu therapy session.

Shaking his head, Joe grabbed her hand and pulled her out of the room.  “I know demo and that wasn’t it.”

“You, babe?  You are finished.”  She opened her mouth to argue, but he covered it.  With his mouth.

Shocked, she stood there with her eyes wide open.  His mouth was pressed against hers.  And it didn’t feel wrong at all.  Without thinking, she melted into him, wrapped an arm around his neck, and allowed her eyes to slowly flutter shut.  Joe bent slightly and scooped her up and held her against his muscular chest.  His lips pulled back, but his forehead was pressed against hers.  She opened her eyes to find him staring at her.

“Crazy woman,” he muttered to himself as he carried her out the back door of the house.  She couldn’t be certain, but it seems like she would have been carried farther if he hadn’t heard the sound of others talking in the front yard.

Slowly he lowered her to the ground and made sure she had her footing before releasing her.  She wanted to smile up at him, but she hadn’t decided what to make of that moment.  All she could do was look at him and murmur…”Why?”

“I needed to distract you,” he responded with a shrug.  And with that he turned and walked away.

NAM: So, nice of you to stop by for an interview, ladies. I was really looking forward to talking to you since you know Marti and Joey.

Keely: That Marti is one sweet woman. It has been such a pleasure to watch her heal down here in the warmth of our community.

Laurel: You think it’s the weather? Please. It’s my cupcakes.

Keely: Well, if it was dessert that healed her…I serve mine with wine. I’m guessing that did more to soothe her soul than all the cupcakes you gave her combined.

NAM: Now, I know that Marti values your friendships…and desserts very much. Keely, you were there when Marti and Joey met. What was that like?

Keely: Fourth of July. There were sparks. Some look passed between them. They both looked…unnerved. And neither of them was ever the same again. The jury is still out as to whether or not that’s a good or bad thing.

Laurel: It’s not Marti. It’s Joe. He has a history of being this…womanizer. Only he’s so honest and up front about it that no one can ever be angry with him. And it’s like all these crazy women think that they can change him. Let me tell you…a tiger never changes its stripes. This I know.

NAM: You’re don’t think people can change? From what I’ve heard of their relationship, Joey is completely different with her.

Keely: Yeah. He’s different. He even seems to have a conscience.

Laurel: I don’t know about that. It could just be that he’s afraid of losing his meals.

Laurel: No, his meals. I withhold in the only way I can. It started with his hot sauce and extended to his desserts, and finally I just stopped serving him altogether. I can be very persuasive.

Laurel: I most certainly did. And I’d do it again if I have to. Knowing Joey, I’ll have to.

NAM: Apparently you two know how to keep men in line. Are you married?

Keely: Yes. My husband lives in Charlotte because of work. We see each other on weekends. And holidays. It’s perfect.

Laurel: Not yet. There’s this guy I’m kind of seeing. I love that he makes me laugh. Without laughter…

NAM: Will we get to see him?

Laurel: Yeah. I’m sure you will. He’s a keeper.

NAM: Good. I’m thrilled for you. What do you see in the future for Marti and Joey?

Laurel: I don’t know if they have a future.

NAM: Well, in order for that to happen, what would it take?

Keely: The patience of Job for Marti. A lot of changing for Joey.

NAM: Laurel, what do you think it would take.

Laurel: Time. And a sense of humor. I hope Joey has one, the big dumb flirt.

NAM: Well, we’ll know more soon. The next installment of the New Hope series, tentatively titled: Tempest Torn, will be out at the end of June. See you then!

a Rafflecopter giveaway
Posted by For the Love of Books at 10:37 AM